This morning I woke up to Jasmin’s alarm going off at who-knows-what time. Since there was no point in going back to bed then, I got up and grabbed my bag (I packed it the night before so I wouldn’t wake anyone up). I changed and then went to the dining hall. I was the first person there (no idea what time it was, still). I turned on some of the lights 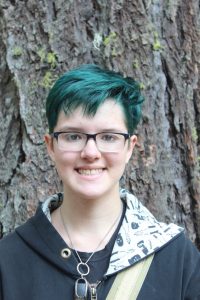 and went to grab some tea, which was followed by hot chocolate.

Other early-risers petered into the hall and we started talking about random shit, as we campers do. Not quite sure what the topics were, but I talked with a lot of random people, some that I knew and some that I didn’t.

After grabbing breakfast I wandered around the dining hall for a little while, looking for somewhere to sit. All the tabes where almost completely filled, so instead I went outside and sat on the log bench by the dining hall. Bubbles was there (I think) and maybe MJ? It’s hard to remember what conversations you have at camp, because there are so many.

After that I hung around until the first workshop of the day, which was being taught by MJ. It was a meditation workshop, in which we learned a few different techniques for relaxing the mind and body. One of said techniques was a guided meditation. She started it by telling us to imagine that we were in a field, whatever kind of field we wanted. I imagined a field filled with red maple leaves, and a few apple trees.

Over the past few days it was very smoky, which meant a few people had some breathing problems, including myself. Luckily today it’s much better out and most of us can breathe easily. Yesterday I wore a mask for the latter part of the day, it really helped with my breathing. It also helped people identify me, because it had my name written on it.

After lunch (during siesta I think) I listened to MJ and Sam playing their ukuleles and singing while I drew.

I also worked on planning out my writing workshop, which really didn’t need any planning, but it made me feel less nervous. The writing workshop was the first one that I ever taught here at camp. (I didn’t teach anything last year and I’ve only been coming for two years now.)

My writing workshop went well, three people attended, which was awesome. We wrote for about an hour, I started the first draft of this post, and wrote about a page in my notebook. I was really excited afterwards because my plan is to have a writing workshop every day that I can. I think that it’s an awesome way to just get in whatever writing people want to do, be it journal, story, or whatever else comes to mind.

I spent the rest of the time until dinner talking with random people and taking a couple pictures. After dinner we had evening meeting, then people milled around, waiting for Bonding Night to start.

There was an amazing surprise just as Bonding Night was starting: a friend of mine, Kitty, who had not planned on coming to this session of camp, came to join us. We were in the same cabin last year and then I didn’t get to talk to her pretty much at all in the time since last year’s camp ended. But then poof, here she was at camp!

Bonding night was a completely wonderful experience, per usual. It’s really hard to describe. The first half we were partnered with different people and had to answer a few questions about what/how we aspired to be. Then, for the second half (called Unconditional Love) the group was split in half. The first half closed their eyes and stood still. The second half went up to them and hugged them. It was silent hugging, so if you had your eyes closed you didn’t know who it was hugging you. I cried when I was my turn to be hugged.

After the official events were over, I was in a cuddle puddle with some of the other campers. Cuddle puddles are very therapeutic, especially after crying.

I ended up going to the field with at least 10 other campers to sleep. It was probably about 1:30am-ish before I actually fell asleep.

and a couple photos from Day 2, by Dandy: 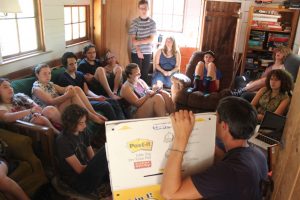